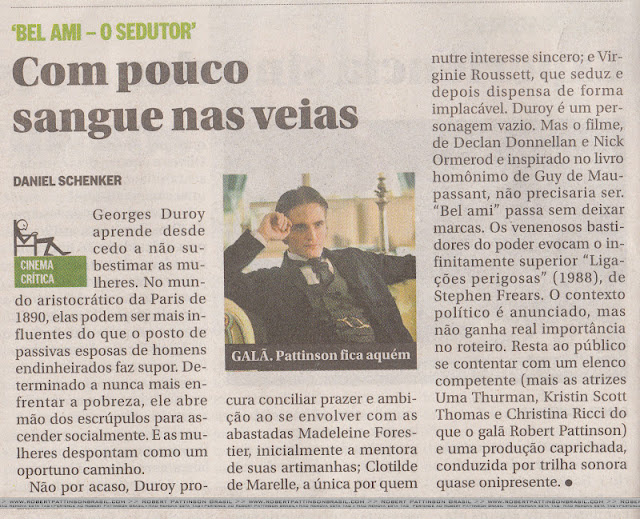 With too little blood in the veins

Georges Duroy learns early on not to underestimate women. In the aristocratic world of Paris in 1890, they may be more influential than the passive position of the wives of wealthy men do suppose. Determined never to fight poverty, he gives up the scruples to ascend socially. And women appear as an appropriate way.

Not coincidentally, Duroy seeks to reconcile pleasure and ambition to get involved with the wealthy Madeleine Forestier, initially the mentor of his antics, Clotilde de Marelle, the only one who nourishes sincere interest, and Virginie Roussett, who seduces and then dispenses with ruthless . Duroy is an empty character. But the film, Declan Donnellan and Nick Ormerod and inspired by the book by Guy de Maupassant, need not be. “Bel Ami” is without a trace. The poisonous halls of power evokes the infinitely superior “Dangerous Liaisons” (1988), Stephen Frears. The political context is announced, but do not get real importance in the script. It remains to the public settle for a competent cast (more actresses Uma Thurman, Kristin Scott Thomas and Christina Ricci as the heartthrob Robert Pattinson) and a whimsical production, led by ubiquitous soundtrack.