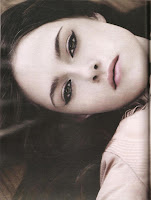 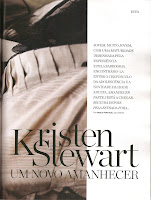 Young, very young, with a maturity drawn by experience and wisdom. We found her between ''Twilight'' adolescence and adulthood novelty. ''Breaking Dawn : Part 2'' is coming. By then ''On the Road''...
(By Paulo Portugal, in Cannes)

Kristen Stewart four years ago, she could never anticipate the turmoil that barely expects to sign the contract to start with Robert Pattinson, the couple romantic of ''The Twilight Saga'', based on Stephenie Meyer’s books.

This girl precocious talent, born and grow up in Los Angeles 22 years ago, was anything but alienated what was happening in the middle of the film. As her parents both worked in films and television, the constant visits to the sets shooting were part of her life. It was therefore natural that lived to 11 years relevant experience in the first film ''The Safety of Objects'', in the company of Glenn Close. Sooner demonstrated tremendous expressive availability however used the creepy ''Panic Room'', playing the daughter of Jodie Foster.

Before reaching maturity, had the privilege of being shaped by Sean Peen in masterpiece about the fury of living called ''Into the Wild''. Until the age of 18, she was presented in the role that would change her life. Then begin the euphoria of gothic romanticism that had spawned many clones.

Here we come to ''Breaking Dawn : Part 2'', now after the birth of Renesmee, the daughter of Bella and the vampire Edward Cullen, a time when the couple will face the wrath of the Volturi clan. Even with supernatural beings of their own new species, Bella fulfil the most important challenge of her life: to defend the daughter that you guess a glorious epic end to the series.

Of course, her career is not limited to ''Twilight'' and the headlines in the media. Because soon after the sequel should assume it’s the role in ''Snow White and the Huntsman'', in which guesses will prolong diversity between blockbusters and challenges more independent. One goes through the expected participation in ''On the Road'', the adaptation to the Brazilian Walter Salles made the legendary novel by Jack Kerouac. It was, indeed, the purpose of this film that we had the opportunity to interview Kristen Stewart during their world premiere in Cannes, and confirm how your life is marked by a before and after ''Twilight''.

There are awkward moments in an interview, in which case the opposite of schedule. Instead of meeting with a media icon cautious, sensitive to certain issues and little available, we found a young casual in jeans and a T-shirt emblazoned with the logo of the pop band Blondie.

Visibly attacked by a violent cold, nasal voice, but without it affecting a speech fluent and intelligent.

Welcome !
I apologize but I am very congested. I got sick as soon as I arrived in Cannes. But I'm feeling a lot better now, thanks.

You must be accustomed to all this madness around you. Do you like giving interviews ?
Of course it's different for each movie, but I think that it completes the process. And I have more and more fun. To be honest, I often only think certain things when someone asks me a question.

Being invited for "On the Road" was a dream come true ?
It was my favorite book. I was 14 or 15 years old when I read it. In a sense it represents a stage of our life when we choose who is our family and who are our friends. It celebrates the fact that we establish new values and priorities in our life. It may seem obvious to say this, but life is not easy.

How do you feel about the arrival of "Breaking Dawn : Part 2" and the end of this franchise ?
I didn't want it to go away. But I've lived with it so many years that I feel some pleasure to move on. Sometimes it happens the opposite; we're making a movie for 5 weeks and we keep the feeling of wanting more. In the case of "Twilight". I think I did the best I could and now its time to move on. However, I'm proud of what I did and all my colleagues.

In emotional terms, how would you define this experience ?
It is a saga that touched me deeply. In this case, I can't choose the words well. because it was all very emotional. It is something that stays there, between the heart and the stomach. It is at the same time something spiritual and also physical. I was really lucky, it was nothing I had planned. I assume this projects because I feel some emotional connection with them. In "Snow White and the Huntsman" I'm proving myself at the same time that I keep credibility of the franchise. This without losing the credit of the independent cinema as it happens now with "On the Road".

Do you think that it is hard to keep a position between the industry and the side of being more independent ?
I don't want to belong to an entertainment industry, neither I want to inculcate something to sell to people. So I don't really feel interesting, I think that my characters are more interesting than I am.

The truth is that people find you very interesting. It was, moreover, because of this franchise that you became an actress long recognized. Don’t you get scared when people chase you because of ''Twilight'' ? What do you feel in these moments ?
The reason why I like what I do is because there is an energy that crosses ourselves when we do something with someone we love. We can be alone in a room and laugh at something that's funny, but it will be definitely different if there is someone in the room with us - there we will be rolling around laughing. Fortunately, I’m in a rare position where I feel very appreciated. Being able to share this with someone is something unique. Being able to be less intimate with the public that with the director or with actors or even in an interview. I would be craz if I don’t feel affected with the possibility to share this feeling with so much people.

So people that can not define limits don’t worry you…
I focus much more in people that like me than in people that are less well-intentioned. It is still crazy when I’m on tour or in a ''Twilight'' set. For those who are outside it is more delusional than it really is. The secret is to walk always really fast. But for me it’s all ok…

With this mediatic madness that you are target, do you feel that you can not live the type of liberty that other people have ?
In reality, I feel free to do everything that is in my head. I imagine that I protect myself a little, but I don’t feel private to do anything. It’s truth that it took a long time to establish limits. I mostly feel that I was far from my ideal. I felt that I could not keep that rationality. But, now, I know exactly what I want to do. And I think that it is a madness when people find interesting to sell themselves. There are people that can sell personalities. I don’t know how they believe it. I’ll never do that.

And you are still very young to don’t feel always in the clouds. About that, who makes you feel that your feet are in land ?
You, the press… (laughs)

(laughs) Really ? You are joking…
It’s funny, because you think that actors don’t like doing interviews. Sometimes I only think in somethings when you do a certain question. And this is someting that i don’t talk with anyone else, it’s someting that I develop only during interviews. Of course that I have a good affective basis, I have a family that is very united. Saying that they support me very much can be a cliché, but it’s true.

At what point it’s difficult to manage your personal life and the mediatic attention over you and Robert ? Can you have time for yourselves ?
As I said, I don’t feel private of anything. I do what I want.

But we have the feeling that the security that you talked did not became arrogance. It was a difficult process ?
It was not easy. It a process of learning, testing on the basis of the trial and error. I began very soon, but I tried to deepen it on the ''Twilight'' set. Now that I think about that, I think that at the age of 17 it’s a bit soon to start thinking about me and to analyze my steps.

You have started to work really early. Do you remember when this cinema experiments started to became more serious ?
At the beggining I thought it was just a job. I admired my parents, that were fascinated for movies. What I wanted was that adults spoke to me. That's why I went to sets and wanted them to give me attention.

Is there a movie that helped you in that decision to be an actress ?
Yes. ''A Woman Under the Influence'', by John Cassavetes [1974].

Have you ever thought how would your life be if you weren´t an actress ?
I really don´t now what to say. I think that I would have to go back to that choice to understand.

What's the most precious thing you take from ''Twilight'' ?
Hummm... Interesting. It's hard to be specific. It were four years of my life. Now, you've got me unprepared... Every day I thought I could do better that I did the day before. The truth is that I end to feel that in each movie. At the end, it was another movie too...

Do you think that helped you to grow up ? As a woman, as a human being ?
Of course. It helped me in everthing I've done. I've been there so long, but that characters remain with us. I think some of the films affected me more than others, but my choices were always so rewarding that it's hard to choose one.

Bruce Springsteen has a music called ''Born to Run'', in which you have to run to, finally, be able to walk at sun. Do you like most to run or to walk at sun ?
It really is a perfect theme for ''On the Road''. At some time, in our life, we have to walk at sun. We can't be permanently searching. That's why this insatiable men's life who couldn't walk at sun endend up, sometimes, in a tragic way. Fortunatly, my character lived until 80, had four weddings and a beautifull daughter. Yes, I think that at some time, we have to settle down... Although, I'm not old enough to answer very wisely to that question...