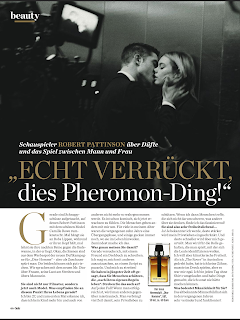 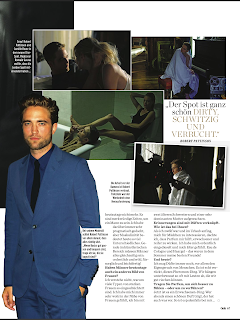 Recently snapshots surfaced of Robert Pattinson making out with beautiful model Camille Rowe. In some she´s fused to his lips while he cradles her head, in other her naked legs lean against the bathtub he´s sitting in. Ok, those scenes are taken from the new "Dior Homme" campaign, but you realize: those two get along well [it´s actually a German wordplay with smell meaning they get along well]. We spoke to the new Mr. Dior about women, his penchant for argueing and being a man.

Now you´re not only an actor, but also a model. How do you feel at this point in your life ?
Well, I´m 27 and for the first time in my life I don´t feel like a child anymore and like others don´t treat me as one. It´s strange, feeling like an adult. People treat me differently. For many people my age the last ten years were like a transition of sorts and some are still trying to figure out what they want to do with their life. At least that´s what I do !

What exactly do you mean ?
Right now I´m trying to write a script, together with a friend of mine. I love to compare notes with others, to pore over a script. And I love arguing !

Lately you often mentioned how you appreciate people who live by their own rules. Is that something you´d want for yourself ?
Definetly ! Being successful makes you wary… you spend a lot of time guarding your private life. Whenever I meet people who don´t give a shit about what others think of them, I´m instantly fascinated.

So you love freedom…
Yes. The more established I am, the more it restricts my privacy. An the quicker people are to judge me. They mistake you for the role you´re playing, the character the want to identify themselves with. When I shot ''The Rover'' in Australia I didn´t have any teeth, I was constantly dirty but I didn´t care. I was running around without a shirt all the time and did things I never get to do.

What does masculinity mean to you ?
The well-trodden image of manliness has changed a lot in recent years and doesn´t really work anymore. These are strange times to be a man… I used to have a very pragmatic approach, but masculinity today means so many different things. Especially in the world of arts men have to be everything at once: neat and wild, a provider and a player !

Do men have a different idea of women today as well ?
I just don´t get why so many guys feel threatened by strong women. I always felt at ease with women around, I grew up with two older sisters and a very dominant mother.

Memories are often connected to scents. How about you ?
When I was 12, on vacation and starting to get interested in girls, I thought that perfume would help me appear grown up and mature. I used to drench myself and felt so adult ! Eau de cologne and hair gel were my best buddies that summer.

What about today ?
I still love scents, especially people´s individual scent. This pheromone-thing is really crazy. We´re subconsciously drawn to people we like to smell.

Do you wear perfume to feel better or in order to seduce ?
See, now that's an adult-thing: someone who applies a nice scent in the evening is up to something. At least that's how I do it !