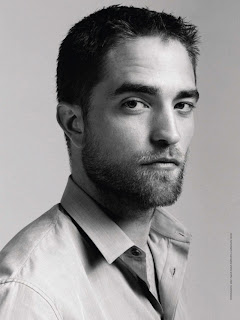 The Beverly Hills hotel is one of the most historic establishments in Hollywood, one of those places in which if you try, you can feel the ambiance and glamour of the golden age of American cinema. Amongst it’s pale pink columns – which have given it the name The Pink Palace – have eaten, slept and drank stars of the stature of Marylyn Monroe, Carey Grant, Grace Kelley, Lucille Ball or Elizabeth Taylor, to name a few. Even today, The Beverly Hills continues to me a main stop for the industry’s royalty and, since the best place to hide a tree is a forest, it is the best establishment to interview the paparazzi’s favorite prey of all of Los Angeles, Robert Pattinson. Dressed in jeans, sweater and a backwards baseball cap, he waits for us in a suite. Donning a scruffy beard he does not sparkle when the California sun illuminates his blue eyes. In fact, Robert looks less and less like a vampire abandoning high school and more like a mature actor seeking out roles with meaning. If you review his recent filmography, you’ll find smaller films – David Cronenberg’s ''Cosmopolis'' – than blockbusters. His collaboration with Dior directed by Romain Garvais, represents one more step on his journey to adulthood. Ironically, the man whom the pressed dubbed the next Jude Law after his role in ''Harry Potter'' is substituting him as the face of Dior Homme fragrance. ''Everyone is the new someone,'' jokes Pattinson. "There are probably about three new me…” He laughs.

In the campaigns films you have some racy scenes with model Camille Rowe. Did she feel intimidated about being in bed with Robert Pattinson ?
No, I don’t think so. She was so… No, I don’t think so (laughs). And if she was, of course she didn’t show it (laughs).

And this doesn’t feel a bit disappointing ?
No, not at all. If you have to kiss someone you don’t know and that person keeps their distance or pulls away it’s horrible, it’s very cutting.

In ''Twilight'' you needed 4 films to have sex and in this one you have 30 seconds…It’s a fast forward.
Yes, that it is (laughs).

I suppose that’s what not being a teenager is about. You’ve said you’re beginning to feel like an adult. Why now, at 27 years ?
I don’t know, I think it’s the age. It’s strange, you start to change, childhood ends and suddenly you feel that your physical appearance is different, you feel heavier. When I see the photos from the campaign or my last film I feel with a very different look than what I’ve had in other things I’ve done, I look older, like an adult, as if before I was.. ''oh lord! You’re like a kid faking it...'' Yes, I think it’s the age.

It’s clear ''Twilight'' has changed your life. Did you ever think it would be so big ?
No, not at all, I lived in a tiny apartment when the premiere came and I didn’t know if we were going to do the sequels. Then the opening weekend came and it was like: ''Oops, now we’re going to have to do the sequels.''

Did you dream with being a big star ?
No, not at all, I didn’t even think about being an actor.

What price have you had to pay for success ?
It’s strange, you can’t have a normal life. You spend a lot of time trying to fight it, but at the end you end up finding a new way to live. People don’t notice how lonely you are. In any case, I feel fortunate because I didn’t achieve success too young and I was at least able to have a life before.

While you filmed ''Little Ashes'' in Barcelona, I understand you invited a stalker to dinner…
Yes, it’s true. It wasn’t that big a deal, it was strange, a bit boring.

You didn’t think she could be a psychopath ?
I can be a little psychopathic too (laughs). She’s the one that should have been scared of me (laughs).

Let me tell you that you portray yourself badly…
Yes, I’m trying to fix that. Before I didn’t like appearing like I had a big ego, now I do. Now I have a big ego (laughs). I will never again pretend to be humble (uses evil voice).

Do you ever feel like you have to apologize for your success ?
When you become famous, it’s so easy for people to hate you just because you are famous. …So you try to beat yourself up so others can’t.