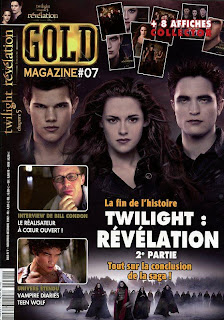 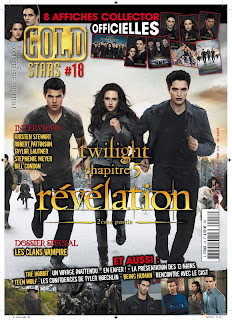 What is it like to arrive at the end of Twilight ?
Kristen : It's very strange. We know there are plenty of people that we will never see again, it's a bit like the end of high school. It was great, but something new is waiting for us, perhaps something even bigger.
Stephenie Meyer : No, that I do not believe it. (laughs) I just hope that the fans will love the end as they liked the first four films. Personally, I was eager to see what would give Bella as a vampire. Kristen is great, the scenes are really cool.
Kristen : I also can not wait for it to happen. Twilight vampires are truly unique. When we are transformed, everything is amplified when, as humans, we already have special abilities, they are exacerbated.
Robert : I'm very happy, not that it stops, but that it is reaching the end. I remember when we shot the first movie, we were all stressed out by the idea that there would be no success and that we wouldn't shoot more of the saga. Then we saw the popularity it has suscited and the fan support has never dried up, even after four films. It is an extraordinary adventure that we have experienced, I am happy to be a part of it.

What will you miss ?
Kristen : Probably the fans, they were passionate, they have supported us all these years. There are very few films that generate much enthusiasm from the public. It's amazing to live such a phenomenon.

What you liked the most ?
Stephenie : See Kristen, Rob, Taylor, Mackenzie and all of the others given life to my characters.
Kristen : I love my character bella, the way it is, it evolves. It is the coolest girl in the saga.

The relationship between Bella and Edward changed radically in the last film, can you tell us ?
Robert : Edward has always been surprised by the attitude of Bella for the first four movies ! Is he more surprised now that this she is a vampire? I'm not sure. What changes the most is that they are now equal. he should no longer protect her all the time, she won't be able to die. On the other hand, it is a newborn, she is fierce and can kill anyone if she can not control it. Edward will need to help her and teach her how to act a vampire. They will get closer as a couple. They know they will now be able to spend eternity together ... Finally, if the Volturi permit it.
Kristen : They will form a true couple. Bella transformation may be what dedicated their union, even more than marriage. The presence of Renesmee will also make them evolve at once. They are parents, and given the speed at which their daughter grows up, they will quickly take over their duty.
Stephenie : Bella and Edward love their daughter, but everyone is wary of her. It affects the look they have towards her. Did they create a monster hiding behind the face of an angel?